In modern shared-memory multiprocessor architectures, each processor has one or more levels of cache that are periodically reconciled with main memory as shown in the following figure: 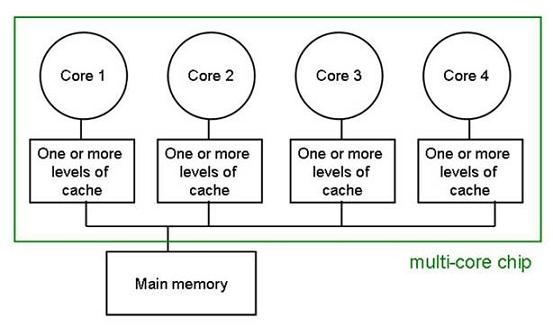 The visibility of writes to shared variables can be problematic because the value of a shared variable may be cached; writing its value to main memory may be delayed. Consequently, another thread may read a stale value of the variable.

A further concern is not only that concurrent executions of code are typically interleaved, but also that statements may be reordered by the compiler or runtime system to optimize performance. This results in execution orders that are difficult to discern by examination of the source code. Failure to account for possible reorderings is a common source of data races.

Consider the following example in which a and b are (shared) global variables or instance fields, but r1 and r2 are local variables that are inaccessible to other threads.

In Thread 1, the two assignments a = 10; and r1 = b; are unrelated, so the compiler or runtime system is free to reorder them. The two assignments in Thread 2 may also be freely reordered. Although it may seem counter-intuitive, the Java memory model allows a read to see the value of a write that occurs later in the apparent execution order.

In this ordering, r1 and r2 read the original values of the variables b and a respectively, even though they are expected to see the updated values, 20 and 10. Another possible execution order showing actual assignments is:

In this ordering, r1 and r2 read the values of a and b written from step 3 and 4, even before the statements corresponding to these steps have executed.

Restricting the set of possible reorderings makes it easier to reason about the correctness of the code.

Even when statements execute in the order of their appearance in a thread, caching can prevent the latest values from being reflected in the main memory.

The Java Language Specification defines the Java Memory Model (JMM), which provides certain guarantees to the Java programmer. The JMM is specified in terms of actions, including variable reads and writes, monitor locks and unlocks, and thread starts and joins. The JMM defines a partial ordering called happens-before on all actions within the program. To guarantee that a thread executing action B can see the results of action A, for example, there must be a happens-before relationship defined such that A happens-before B.

According to section 17.4.5 "Happens-before Order" of the Java Language Specification [JLS 05]:

When two operations lack a happens-before relationship, the Java Virtual Machine (JVM) is free to reorder them. A data race occurs when a variable is written to by at least one thread and read by at least another thread, and the reads and writes lack a happens-before relationship. A correctly synchronized program is one that lacks data races. The Java Memory Model (JMM) guarantees sequential consistency for correctly synchronized programs. Sequential consistency means that the result of any execution is the same as if the reads and writes on shared data by all threads were executed in some sequential order, and the operations of each individual thread appear in this sequence in the order specified by its program

The actual execution order of instructions and memory accesses can vary as long as the actions of the thread appear to that thread as if program order were followed, and provided all values read are allowed for by the memory model. This allows the programmer to understand the semantics of the programs they write, and allows compiler writers and virtual machine implementors to perform various optimizations [JPL 06].

There are several concurrency primitives that can help a programmer reason about the semantics of multithreaded programs.

Declaring shared variables as volatile ensures visibility and limits reordering of accesses. Volatile accesses lack a guarantee of the atomicity of composite operations such as incrementing a variable. Consequently, use of volatile is insufficient for cases where the atomicity of composite operations must be guaranteed (see VNA02-J. Ensure that compound operations on shared variables are atomic for more information).

Consider two threads that are executing some statements:

Thread 1 and Thread 2 have a happens-before relationship such that Thread 2 cannot start before Thread 1 finishes.

The previous example lacks a guarantee that statements 1 and 2 will be executed in the order in which they appear in the program. They may be freely reordered by the compiler because of the absence of a happens-before relationship between these two statements.

The possible reorderings between volatile and non-volatile variables are summarized in the matrix shown below. Load and store operations are synonymous with read and write operations, respectively. [Lea 08]

Note that the visibility and ordering guarantees provided by the volatile keyword apply specifically to the variable itself, that is, they apply only to primitive fields and object references. Programmers commonly use imprecise terminology, and speak about "member objects." For the purposes of these guarantees, the actual member is the object reference itself; the objects referred to by volatile object references (the "referents", hereafter) are beyond the scope of the guarantees. Consequently, declaring an object reference to be volatile is insufficient to guarantee that changes to the members of the referent are visible. That is, a thread
may fail to observe a recent write from another thread to a member field of such a referent. Furthermore, when the referent is mutable and lacks thread-safety, other threads might see a partially-constructed object or an object in a (temporarily) inconsistent state [Goetz 2007]. However, when the referent is immutable, declaring the reference volatile suffices to guarantee visibility of the members of the referent.

There are two sequentially consistent execution orders of this example:

Correct visibility guarantees that multiple threads accessing shared data can view each others' results, but fails to establish the order in which each thread reads or writes the data. Correct synchronization both provides correct visibility and also guarantees that threads access data in a proper order. For example, the code shown below ensures that there is only one sequentially consistent execution order that performs all the actions of thread 1 before thread 2.

When using synchronization, it is unnecessary to declare the variable y as volatile. Synchronization involves acquiring a lock, performing operations, and then releasing the lock. In the above example, the doSomething() method acquires the intrinsic lock of the class object (Assign). This example can also be written to use block synchronization:

The intrinsic lock used in both examples is the same.

Volatile variables are useful for guaranteeing visibility. However, they are insufficient for ensuring atomicity. Synchronization fills this gap but incurs overheads of context switching and frequently causes lock contention. The atomic classes of package java.util.concurrent.atomic provide a mechanism for reducing contention in most practical environments while at the same time ensuring atomicity. According to Goetz and colleagues [Goetz 06]:

The atomic classes consist of implementations that exploit the design of modern processors by exposing commonly needed functionality to the programmer. For example, the AtomicInteger.incrementAndGet() method can be used for atomically incrementing a variable. The compare-and-swap instruction(s) provided by modern processors offer more fine-grained control and can be used directly by invoking high-level methods such as java.util.concurrent.atomic.Atomic*.compareAndSet() where the asterisk can be, for example, an Integer, Long or Boolean.

The java.util.concurrent package provides the Executor framework which offers a mechanism for executing tasks concurrently. A task is a logical unit of work encapsulated by a class that implements Runnable or Callable. The Executor framework allows task submission to be decoupled from low level scheduling and thread management details. It provides the thread pool mechanism that allows a system to degrade gracefully when presented with more requests than the system can handle simultaneously.