Many programs accept untrusted data originating from arbitrary users, network connections, and other untrusted sources and then pass the (modified or unmodified) data across a trust boundary to a different trusted domain. Frequently the data is in the form of a string with some internal syntactic structure, which the subsystem must parse. Such data must be sanitized both because the subsystem may be unprepared to handle the malformed input and because unsanitized input may include an injection attack.

In particular, programs must sanitize all string data that is passed to command interpreters or parsers so that the resulting string is innocuous in the context in which it is parsed or interpreted.

This noncompliant code example demonstrates an XSS exploit. This code uses the CGI module to display a web form and is adopted from an example from the CGI.pm documentation. The form queries the user for a name and displays the resulting name on the page when the user clicks Submit.

When fed a benign name, such as Larry, this script works well enough: 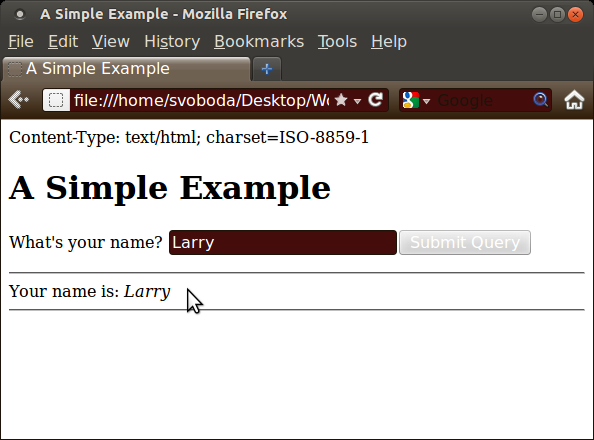 But this code will happily parse image tags, HTML markup, JavaScript, or any other commands an attacker may wish to send. The following picture demonstrates a remote image being loaded into the page on the request of the attacker: 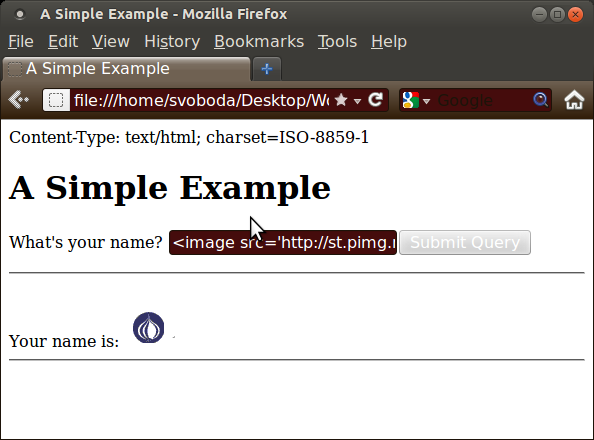 In this case. the trust boundary exists between the untrusted data and the CGI script, whereas the trusted domain is the web browser—or rather the HTML parsing and rendering engine within the web browser.

More details about sanitization of this code example can be found in IDS01-PL. Use taint mode while being aware of its limitations.

Using taint mode will not detect or prevent XSS. Taint mode does not prevent tainted data from being printed to standard output.

To prevent injection of HTML, JavaScript, or malicious images, any untrusted input must be sanitized. This compliant solution sanitizes the input using the escapeHTML() subroutine from the CGI library.

When fed the malicious image tag demonstrated previously, the escapeHTML() subroutine sanitizes characters that might be misinterpreted by a web browser, causing the name to appear exactly as it was entered: 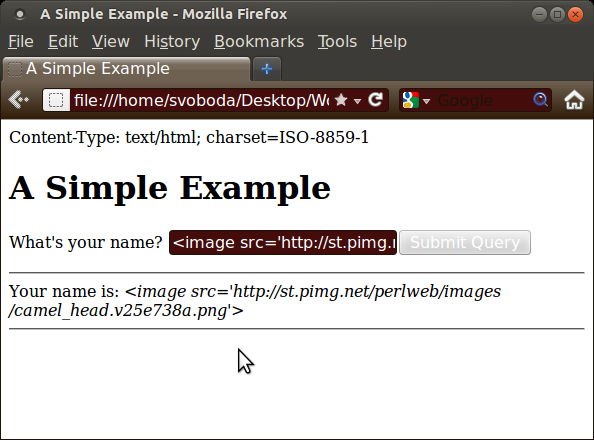 A SQL injection vulnerability arises when the original SQL query can be altered to form an altogether different query. Execution of this altered query may result in information leaks or data modification. The primary means of preventing SQL injection are sanitizing and validating untrusted input and parameterizing queries.

If it returns any records, the user ID and password are valid.

However, if an attacker can substitute arbitrary strings for <USERID> and <PASSWORD>, he can perform a SQL injection by using the following string for <USERID>:

If validuser is a valid user name, this SELECT statement selects the validuser record in the table. The password is never checked because userid='validuser' is true; consequently, the items after the OR are not tested. As long as the components after the OR generate a syntactically correct SQL expression, the attacker is granted the access of validuser.

Likewise, an attacker could supply a string for <PASSWORD> such as:

This would yield the following command:

This noncompliant code example shows Perl DBI code to authenticate a user to a system. The program connects to a database, prompts the user for a user ID and password, and hashes the password.

One way to find potential injection points quickly is to use Perl's taint mode.

Perl will refuse to permit tainted data from entering the database via the prepare() method call. It will immediately exit with an error message:

Note that not only must the program be run in taint mode, but the TaintIn attribute must be set on the connection handle, enabling taint checks to be run on the database.